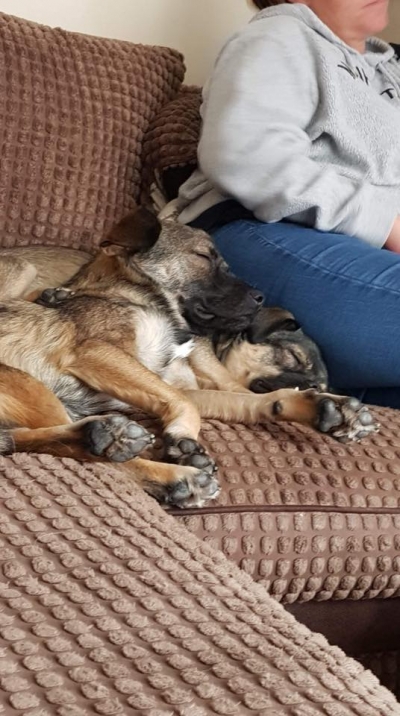 Today is a really special happy ending ... well they all are but this is extra special!

On Christmas Day 2016 we found Noel hidden in a drain a couple of kilometres away from us. He was in the middle of nowhere, about 6 weeks old and would not have survived. He was adopted by Tara and Andrew from Rugby in the UK.

A few months ago we were told about a dog that was in a derelict house in the next village to us. We went and found Murphy who was petrified, he was reluctantly captured and our instant thought was that he is Noel’s brother. The likeness was unbelievable. So we contacted Tara who wanted him straight away!

Murphy was a worry, we have no idea what he has been through but we know whatever it was had traumatised him. A bit of TLC and training and off he went to the UK.

As you can see everything is great, Noel and Murphy are best buddies.Thank you Tara and Andrew for giving both of these boys a home. Their lives really have got a lot better.

A final little tale about these two. Noel was named after our brother in law. So when the second dog came along we had to call him Murphy, this is Noel’s surname! Not sure if the real Noel Murphy wanted dogs naming after him but the dogs are happy with that!