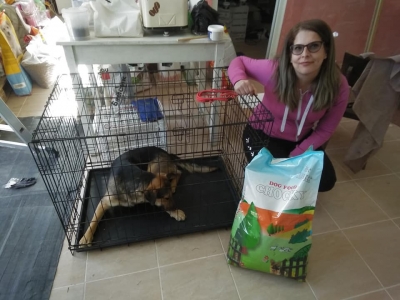 "Don't collect anymore dogs" said Emma as she set off with the latest transport to Germany and England.

Because of the political shambles that is or isn't unfolding in the UK we are facing some uncertainty regarding taking dogs to England in the future. Then yesterday she messaged me to collect the big lad in the pictures.  It's a long story but his owner has to go work away and there is nowhere for Rocky to go, so he's here. The other girl pictured in the cage was caught by Maggie & I in town today, she's a new girl and was running around scared, so she's here too!

They have both been neutered today and we'll see what transpires for their futures, hopefully business as usual and they'll soon be off to new lives.  The other three dogs are Sara, Billy & Bramble. Quietly behind the scenes I've been gaining their trust while I've been home alone. Bramble has been here almost two years and I've never been able to touch her until now. Billy almost a year and pretty much the same. You know Sara's story. Progress I think