A new life for Frank…….written by Louisa aged 9 for her school project. 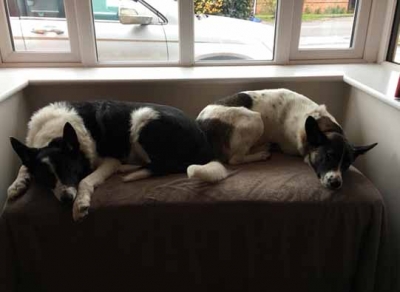 A long way from England lived a young puppy called Frank, he had a terrible life because he lived on the dirty streets of Bulgaria. Not just that but every night and every day he stood in the cold and slept on the freezing snow. Frank was always hungry, he ate the scraps from the bins that could make him very poorly. The only precious thing he had was his brother and the pack of dogs he roamed the streets with every day.

In a nearby village lived a family who were very worried about how many homeless dogs there were in Bulgaria, dogs were abandoned and left to roam the streets. So, one day they decided to set up a charity for homeless dogs that needed there help. They looked after dogs that needed to go to the vets, some were poorly, some were puppy’s like Frank who had no puppy fat on them and some had diseases.

When the family visited their nearest town, they saw two dogs on the street scavenging for food and it was Frank and his brother. Both dogs looked very cold and hungry so the family decided to try and get Frank and his brother to the farm to make sure they had shelter and food. As the family tried to get to the brothers, Franks brother ran off into the distance. Frank tried to follow him but he was too weak and slow so he couldn’t catch up with him. The family were able to take Frank into the truck and home to the farm.

The family turned around and went straight to the vets for Frank to be checked, they still wondered about Franks bother but decided they would go back to look for him another day. They wanted to get frank sorted out first as he was in a bad way. When they got to the vets, he got all the help he could. As soon as Frank go to the family farm he met all the other dogs. He felt comfortable but he wondered where his brother was. He also knew that he could not stay at the farm forever, he needed his forever home.

In England there was a lady called Anj who had one dog called Sally. Anj loved dogs so much she found out about the charity and the website and wanted another dog and luckily Frank got chosen to go to England. Frank didn’t know what was going on but all he knew was that he was going to have a new family all the way in England. England was 2000 miles away from Bulgaria! It was going to be such an adventure for Frank.

Before Frank could go to England he needed a dog passport and a full medical check-up, as well as lots of other paper work and checks. He soon left for England, the journey took 3 days and he even had to go on a ferry. Frank was very nervous but he was also very excited at the same time. After 3 long days Frank finally arrived at this new home. When he got there, he met his new family, Anj and Reg but in the background, there was another dog who looked just like Frank – black and white. When Anj introduced Frank to the other dog he found out he discovered this was his new sister! Her name was Sally. Life wasn’t all easy for him and at times he worried he didn’t know the language, he didn’t know how to live with a family or how to eat without making a mess. But who could blame him? He was born on the dirty streets of Bulgaria with no family! A few months on he now has a great life with a mum and a dad and a sister – and this is how Frank got his new life.