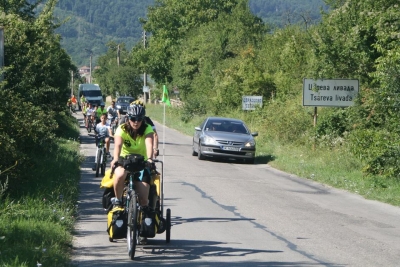 Kate Lamb is an actress, adventurer and animal lover. She also happens to be a dog behaviourist offering her services to dog-owners of the London acting world and she has dreams of setting up her own dog rehabilitation and training centre in the UK. Amongst her various interests and endeavours Kate also does parkour and bouldering in London and, bizarrely, this connection led her to us. Bulgaria has some excellent bouldering areas and friends of hers from the London Parkour and climbing community rented our bungalow (when we suddenly realised we needed income for our rapidly growing dog-food bills.) Kate kept seeing photos of puppies and pack walks posted by Andy and Zof and was intrigued by this ‘Bulgarian puppy paradise’ but work and other commitments kept her from visiting.

When her thirteen year old dog companion, Willow, died at the end of 2016 Kate found herself dogless for the first time in years and, luckily for us, free to travel across Europe in search of a canine fix. ‘I’d spent two weeks in France and Austria visiting friends and snowboarding and I just figured I’d keep going east – I spent nearly 18 hours travelling from Austria to Emma and Anthony’s – the taxi arrived at 2am, we’d nearly run into a horse in the middle of the road, I had no idea where we were, I knew no Bulgarian, and the car stopped seemingly in the middle of nowhere, no town, no street lights and it was pitch black. “We wait for Emma” said the driver, and then another car approached us and stopped. In the beam of its headlights, like some shady backwater deal, I shook hands with Emma and Anthony and climbed into their truck to bounce up their driveway.

‘I was immediately struck by how little barking there was – nothing like any shelter I’ve been to before and then I was sneak attacked by Big Lad and Tipsy and Poppy and Lotty and licked and wagged to death before climbing up stairs to a bedroom made cosy and welcoming by a wood burner in the corner. The rest is history.’

Kate was a whirlwind of energy and focus when she was with us – on her first morning we caught Susie and her two 6 month old daughters who had never been touched by people before – one of them bit both me and Anthony as we caught her. Kate started work with them immediately, using techniques and methods we didn’t know about and within 6 days they were lead trained and on their way to being pets. Luna and Themba now have happy forever homes in the UK. Kate also set up a go-fund me page while she was here and coined the name ‘Street Hearts BG’.

‘It was just a temporary name for the fundraising campaign, I wanted something catchy that people could engage with. I set it up because I realised Emma and Anthony were just using their own money to pay for vet bills and food and it couldn’t possibly be sustainable. They are far too generous, they wouldn’t let me pay for anything while I was there! And believe me, I tried! Emma and Anthony have such big hearts – the name came from them really.’

Well, we’ve been Street Hearts BG ever since – the name stuck, and so did Kate. Her second time with us (we begged her to come over and help us again just eight weeks later) she met a skinny little street dog who stole her own (pretty sizeable) heart. Scout and she then did the impossible and cycled home to London over six weeks and raised thousands of pounds to go towards the future of Street Hearts BG. Now Scout is regularly seen at climbing walls and doing ‘dog parkour’ when she’s not snoozing quietly back stage at the theatre or in a trailer, quite possibly the luckiest street dog around!

‘I fully support Emma and Anthony and all they do to help the dogs of Bulgaria. From neutering, to owner education, to rehabilitating and rehoming, everything they do is for the sake of the dogs and costs them money, time, effort, and heartache. They’ve created such a haven for dogs with their free-run centre that I’ve never seen a happier bunch of shelter pooches. The work and training they do and the time they take to make sure each dog is ready to move on to a home is essential in ensuring Street Hearts BG dogs find their forever families. It’s this that sets them apart from other rescue and rehoming shelters and I am proud to have contributed to and be a patron for Street Hearts BG.’