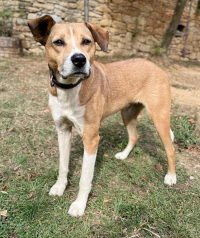 Cara was found hiding underneath a car in the winter of 2021, just after giving birth to her puppies in the snow. She was clearly an owned dog who had been cruelly dumped. Cara was brought to our shelter and spent the next five months caring for her puppies until they all found their furever homes.

It took some time for Cara to trust people but, in recent months, she’s started to show a loving and playful side, especially with her favourite humans. She is an active and independent girl who joins every pack walk but keeps herself to herself throughout the day. She isn’t a 'dog’s dog' but has tolerated shelter life remarkably well. In fact, she currently sleeps in the Ark with up to twenty other dogs. Cara generally doesn’t engage with the rest of the pack but the dogs respect this and give her space.

Cara walks beautifully on the lead. She enjoys company and affection from the people she knows and trusts. We believe that she will come out of her shell even more when she is settled in a home of her own.

We estimate that Cara is around seven years old. She can be food protective around other dogs; therefore, she would be best suited as an only dog. Cara could live in a rural or semi-rural home. Cara could also live with dog-savvy children (aged 7+). She has not been cat-tested; this can be done upon request.

Adoption Application Form Browse all dogs for adoption
back to top