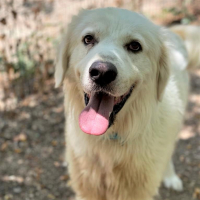 Prince was found wandering in the town of Dryanovo. We were able to track down his owner via social media; however, the owner no longer wanted Prince and had chosen to abandon him.

We believe that Prince is a Great Pyrenees Mountain Dog, traditionally used for protecting livestock. He is a calm and gentle giant who loves people and a good fuss! Prince walks impeccably on the lead and generally has excellent manners, although he will occasionally jump up at people in his enthusiasm to greet them. We will continue to work with Prince in order to reduce this behaviour.

Prince's estimated date of birth is September 28th 2017. He is large in size. Prince could live with another friendly and confident dog but cannot live with cats. Due to his size, we will only consider adult only homes for him. Prince could live in any home environment, from rural to urban.

Adoption Application Form Browse all dogs for adoption
back to top