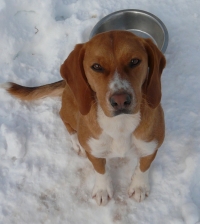 Shandy is a beautiful 3 year old girl, who lived outside a mans house where she had access to food. When we managed to catch her, she was in season. The man didn't want her back and she was at risk of being poisoned.

When she arrived, she was incredibly nervous and would hide from anyone who approached. She hated being touched and shook with fear if we tried.

We've been spending a lot of time working with her and helping her to overcome her fears. It's a long process, but she has made amazing progress and now loves to receive hugs from the three of us. She is still nervous around strangers and people she's not known for long, so it will be a while before she could be considered for adoption.

Browse all dogs waiting to be sponsored
back to top