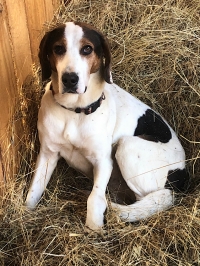 Bailey is an 8 year old girl who has very deformed front legs, it is likely she was used for hunting and grew up on a poor diet. She was found on the streets and was with a dog who had been shot, he is also in the shelter.  A number of cats had also been shot in the area so it was likely that she would come to harm

Due to her front legs it is unlikely that we will ever be able to rehome her.

She is an absolute sweetheart who has settled into shelter life really well, she loves a walk, a cuddle  and then snoozing in a warm place.

This dog is already sponsored

Browse all dogs waiting to be sponsored
back to top